We stayed overnight in Slidell, and crossed our fingers that the trip into NOLA wouldn’t be a nightmare. Despite the bridges, it was really OK. It was early and pleasantly warm, so we crossed the city to take in some bayou at the John Lafitte National Historical Park and Preserve. Then back to the city to take in the sights.

At the entrance to Storyland Park, located in NOLA City Park 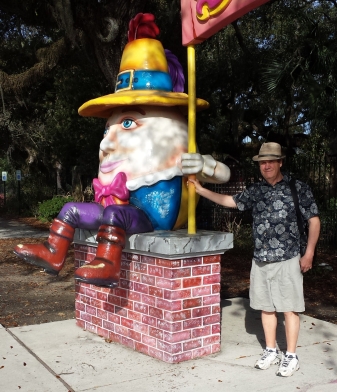 My favourite Big Things sculptor! Claes Oldenburg embraced the idea of oversized everyday objects with a passion, and his works are in world class sculpture gardens everywhere. I hope to see as many in person as possible. This giant safety pin is in the sculpture garden at the New Orleans Museum of Art, a jewel in NOLA’s City Park. More about Claes Oldenurg at this link to Wikipedia, Claes Oldenburg

Spider by Louise Bourgeois, the artist who created Ottawa’s Maman, The sculpture Maman also has homes at the Tate and the Guggenheim, and numerous other permanent locations, as well as travelling works. For more about the artist, check this link to Wikipedia, Louise Bourgeois

Finally, we arrive at the French Quarter. It is one week after Mardi Gras, the trees are still draped in beads, and the city appears to be recovering from a massive hangover. In relative peace, we got to enjoy the old city, drink chicory coffee and eat beignets at Cafe du Monde, check out Lafitte’s Blacksmith Shop (oldest bar in America!), have a Hurricane at Pat O’brien’s and generally enjoy the architecture.

No trip to New Orleans would be complete without a stop at Beads by the Dozen – the perfect place to buy a few kilos of Mardi Gras beads! We did find some nice souvenirs to tuck in our Christmas tree.

Some people just don’t know when the party is over! 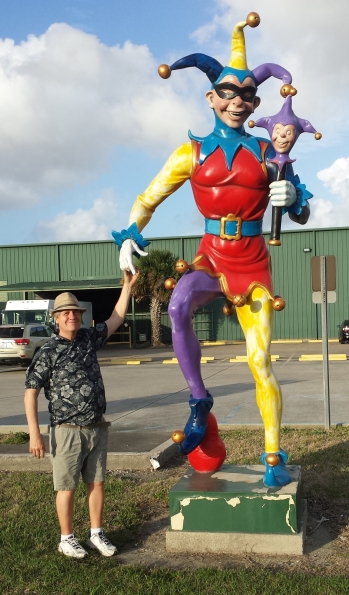 Another of those incidental sightings – giant keys!

Amusing balloon dog in support of the SPCA 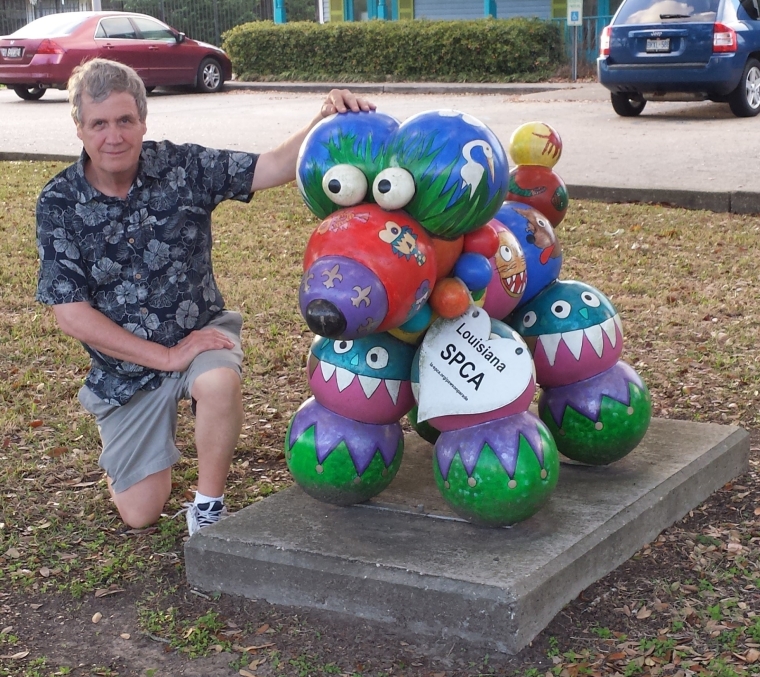 At Ted’s Frostop, just off of Claiborne Avenue. After Hurricane Katrina, the owners found it’s iconic giant root beer mug knocked off its pole and perfectly upside down. It stayed that way for some time, but has now been remounted on it’s pole. That is the end of Day 1 in New Orleans. We have run out of light again, but this time it worked out great, as the mug is lit with neon lights.

Do you know of a larger-than-life item that hasn't been pictured here? We LOVE suggestions. The item should be a permanent installation, not inflatable or made of temporary material. We will add it to our ever-growing-list of places to go. Type your suggestion in any COMMENT field in the blog.

How this is organized

Or disorganized! Because I have been taking these pictures for two years, but am just getting around to posting them, I couldn't come up with a good way to organize the materials. So the archived stuff is going in by Province/State, and after that I'll go into full blog mode. So scroll through everything, or use the search option below.

Want to see things that have been labelled World's Largest? Just type WORLD'S LARGEST into the search box

Sort by province or state